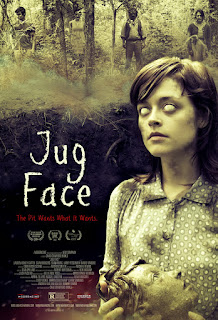 A backwoods community sacrifices their own to a pit in order to take advantage of the heeling powers of said pit. Their method of determining the next sacrifice? A drunk, borderline retarded potter gets a vision and creates a jug with their face on it (hence the bizarre title of the film). When pregnant teen Ada (Lauren Ashley Carter) discovers her jug she hides it, resulting in all hell breaking loose in the woods. 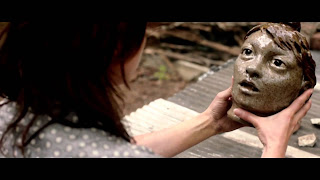 This is an absolute mess of a movie that tries to do way too much. If you think the premise above is not enough, throw in the fact that Ada has an insane mother (an almost unrecognizable Sean Young of Blade Runner fame) and a sadistic father (B-movie vet Larry Fessenden). Still not enough you say? Okay, here goes--the father of her unborn child is her brother. Okay, yes, I think we have covered ALL the hillbilly stereotypes now. The acting in this film is actually pretty good, which helps make the film watchable. Unfortunately, there's not much else going for this movie. Really, the story is a decent one and screams direct to video horror from the 1980s. It simply suffers way too much from convoluted nonsense and really, really bad special effects. It won't take long before you start to zone out watching this film as there are really long stretches of little to nothing happening to advance the story. The death scenes are fairly gruesome but nothing you don't see coming, and the end leaves you wondering why in the world Ada even still cared at this point. I wanted to like this movie but in the end just couldn't bring myself to do so.