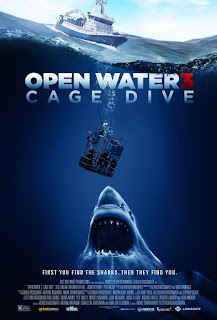 In 2003, the film Open Water became a surprise box office hit--the inevitable sequel followed in 2006, and eleven years later, it became a trilogy with Open Water 3: Cage Dive. In this one, three Americans, played by Australians, visit the land down under in hopes of becoming contestants on some reality game. They decide to go on a cage dive to see some sharks up close and personal and, this being an Open Water film, you can imagine what happens next. 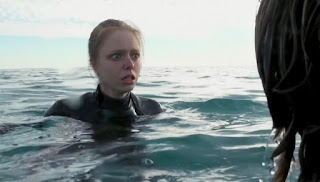 "I'm going to be floating in water HOW LONG?!"

As is typical with these "Americans visiting foreign lands" horror films, we get the arrival scene, followed by the party scene, followed finally by the distress--mercifully, this movie gets through the initial part of this model fairly quickly, but fails to make any of the three main characters even remotely likable, leading to the viewer not really caring a lot about their fate. Once they end up in the water, we actually get some shark attacks and a fair amount of gore, which is a nice touch. The movie is shot as a hybrid between a found footage film and documentary, and that works out fine, except it does have the same drawback most found footage horror movies share--the unlikelihood that somebody would actually continue shooting through all the scares. The acting is fair, and it has more action that its predecessors--these things may not combine to make Open Water 3: Cage Dive a great movie, but they certainly make it the best of the trilogy.

THE FURY OF THE WOLFMAN (aka La furia del Hombre Lobo) 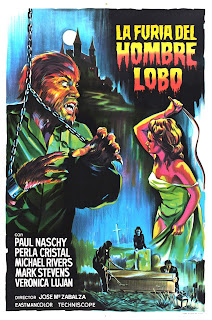 The Fury Of The Wolfman Movie Review

Professor Waldemar Daninsky (Paul Naschy) becomes a werewolf after being bitten by a yeti; some time later, Waldemar murders his cheating wife, but is killed trying to escape after the crime--our story doesn't end there, however, as the werewolf prof is brought back to life by Dr. Ehrmann (Perla Cristal), a scientist experimenting with mind control. This is an absolute mess of a film, but in a bizarrely right sort of way. What unfolds, while slow at times, is so unusual that it keeps you watching. How many times, especially in movies this old (1970), do we see a blood-thirsty werewolf portrayed as a somewhat good guy? What was the point of Ehrmann's mind control experimentation? They mention it, but does it really matter?

Speaking of Ehrmann, Cristal does a good job with the role--at least in the facial expressions; the rest of the "acting" in the film is a struggle. The directing is also bad, but enjoyable, as is the reel to disc transfer. This all leads to a final scene that is wonderfully rewarding as well as head-scratching and just...yes...weird. The Fury Of The Wolfman, a movie that is part of an entire Spanish movie series, as it turns out, will likely never be described as a great movie, but it is a lot more fun than it has any business being.


I couldn't find the trailer, so enjoy the entire The Fury Of The Wolfman movie
Posted by Josh at 3:22 PM No comments:

THE SHAPE OF WATER 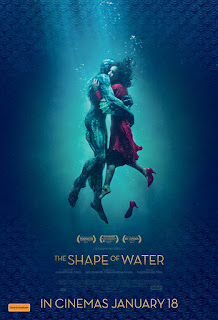 The Shape Of Water Movie Review

The Shape Of Water--It's a little bit like Creature From The Black Lagoon, and a lot like Splash, but with a lot more profanity and nudity, and very little of the comedy...yeah, that about wraps it up... 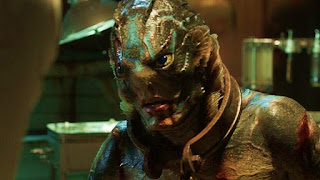 Okay, okay, I'll talk a little more about this film--it is the 2018 Academy Awards winner for Best Picture and Best Director (Guillermo Del Toro), as well as the winner for Best Original Music Score and Best Production Design; it also had close to ten additional nominations--I wouldn't swear to it, but I would say this is likely the first Best Picture winner I've reviewed on this site. The story plays out like this--a mute woman (Sally Hawkins, Godzilla) falls for a distant relative of Gill-man (named Amphibian Man here, and played by Doug Jones of The Bye Bye Man), but a military faction, headed by a jerk (Michael Shannon of Bug, a movie that if I were to review would make the Worst of the Worst list), wants to kill and perform research of our fishy friend...sound familiar? 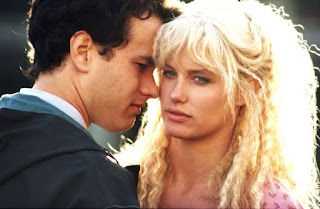 Lack of originality aside, this movie actually does have a lot going for it The film is visually stunning--it combines a gritty realism with scenes that would rival practically any other fantasy film. Del Toro does a wonderful job directing, adding unique camera angles and shots throughout. The acting is very good across the board--Shannon does such a wonderful job as the villain you will want to reach into your set and choke him. Personally, my favorite thing was that Del Toro skipped the whole CGI monster thing, choosing instead to put a man in a rubber suit, just like...you know. 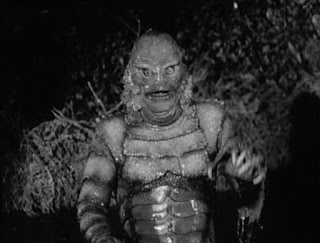 Maybe he read this?

Was The Shape of Water the best film of 2017? No, it wasn't. Was it a really good film? No question. Though primarily a love story, it does hold enough horror and sci-fi elements to please fans of those genres, and no doubt, anybody reading this right now.


The Shape Of Water Movie Trailer
Posted by Josh at 11:11 AM No comments: