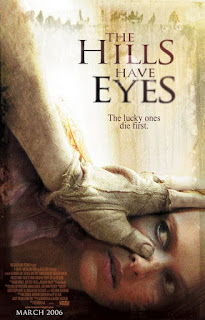 The Hills Have Eyes 2006 Movie Review

A family driving through the desert on their way to San Diego stops at a remote gas station--there,  the owner gives them directions leading them to a mutant, cannibalistic clan. This 2006 remake of the 1977 Wes Craven classic is a little slow out of the gate, but once it picks up it's a whirlwind of blood and carnage. The mutants are wonderfully hideous. 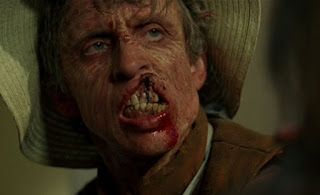 The makeup department deserves many kudos as the deformations look genuinely real for the most part, making it easy to believe these people are really out there. The violence is unrelenting and graphic--in fact, several minutes had to be cut out to avoid an NC-17 rating (there is an unrated version that restores many of the scenes, and is the version I own/am reviewing as we speak). Some scenes are difficult to watch, including the entire sequence of the mutants first attacking (it involves burning alive, rape, and point blank gunshots). Another thing I really enjoy is how they present the characters--you are absolutely certain who the survivor(s) will be once the characters are introduced, but that notion is very quickly wiped out. There are a couple things I didn't like about this film. The acting from the victims leaves a little to be desired, though Ted Levine (The Silence Of The Lambs, Shutter Island) does a good job as the family patriarch, Big Bob, and Dan Byrd is believable as the son Bobby. The characters also make some decisions that will leave you scratching your head, but then again, it IS a horror movie after all. Overall I think this is a very well made remake and a horror film every fan of the genre should check out.

﻿
The Hills Have Eyes Movie Trailer
Posted by Josh at 6:13 PM