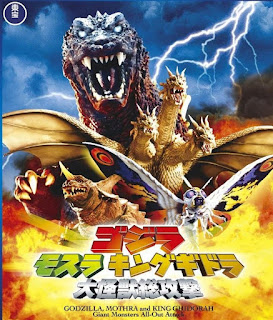 
Godzilla is back to wreak havoc on Japan, and the country's only hope comes in the form of three other monsters--Mothra, Baragon, and...King Ghidorah...KING GHIDORAH?!?! Wait, they are making King Ghidorah a GOOD GUY??? As we learned in his 1964 film, Ghidorah is one of, if not the, greatest giant monster movie villains. Godzilla I can buy--and prefer--as a bad guy, but Ghidorah as a good guy was not something I was prepared for going into this 2001 film, and after watching it, I'm still not buying it. This version of Godzilla, on the other hand, is pretty awesome. He is relentlessly brutal, leaving carnage everywhere he goes--he looks really cool too.

We get some neat battle scenes, with the rubber suits and miniatures, but we also have far too much really bad CGI. This stuff isn't acceptable in most movies, but especially not a Godzilla movie. There are also some other changes that are a little disappointing--Ghidorah's faces look very different and he is much smaller than before. Mothra looks like a butterfly and her powers are completely different now--plus she doesn't have the twin fairies with her this time around. Baragon also has changed, losing his heat ray and he has a different horn now. The story goes a little sideways too, with a ghost and spirits, including Godzilla having spirits inside him! All this weirdness actually kind of adds to the enjoyment of the movie, as does the more violent than usual battles--we even see the monsters bleed! The ending leaves a lot to be desired, and reminded me way too much of Friday The 13th Part 9, which is never a good thing. Yes, this movie with an absurdly long title is a bit of a mess, but it sure is a lot of fun to watch too.

REVENGE OF THE CREATURE 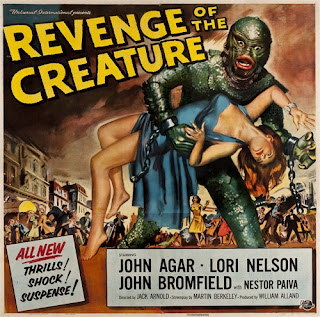 Revenge of the Creature Movie Review

Having survived an encounter with humans, the Creature (or Gill-Man, whichever you prefer) is being hunted again. When he is inevitably captured, he becomes an attraction at a Florida park. 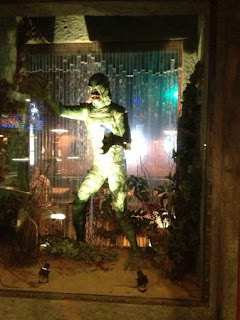 If you're interested, this was actually done at Marineland of Florida, and that park is still in operation today--and now I have a new road trip destination! After the success of Creature From The Black Lagoon, Universal was quick to release a sequel, and, while not as good as the original film, this one is still enjoyable. Fans of the original film will notice a couple very distinct differences in Gill-Man this outing, particularly the fact that bubbles come out of the top of his head when he swims now, and his face--especially his eyes--are much different. 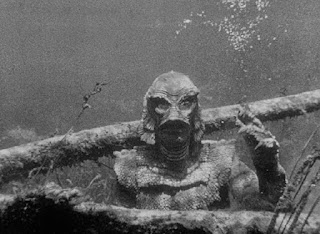 He's still a handsome fella though

Unlike in the third film, where the look just goes beyond bizarre, Gill-Man still looks like Gill-Man here, so I have no complaints about the changes. I don't know if this is what they were going for, but you really feel for Gill-Man in this movie--first, he has to try to run from the people trying to capture him, then, once captured, he is chained to the bottom of the water and tortured by Helen (Lori Nelson) and Clete (our pal John Agar of The Mole People and Night Fright), and then he is chased some more. Many of the shots in this movie are wonderful, with one in particular between Gill-Man and Helen that no doubt inspired some parts of The Shape of Water. We also get the film debut of Hollywood legend Clint Eastwood in a quick, comical scene. Not all is great here, however. The dialogue is laughably bad at times, and Clete's obsession with Helen is a bit much. Most bothersome is the lack of consistency with Gill-Man's strength--in one scene he struggles with Clete, but in others he is strong enough to snap a thick chain and turn over a car. The idea of The Creature coming back for Helen also leaves a lot to be desired. Even with all that, I like Revenge of the Creature and recommend it.

Revenge of the Creature Movie Trailer 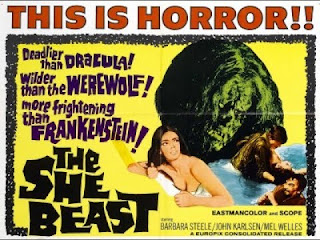 Philip (Ian Ogilvy, Death Becomes Her) and Veronica (Barbara Steele, Nightmare Castle, The Ghost) are involved in a car crash that results in Veronica being possessed by the spirit of a witch. Now the witch is on the loose, and Philip enlists Count von Helsing (John Karlsen) to help bring his wife back. So if you are a Steele fan, as I am, and you watch this movie just for her, as I did, you will be very disappointed, as I was. 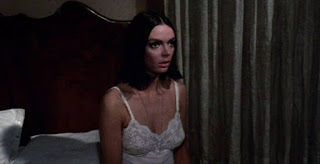 "Are you still disappointed?"

The disappointment is not in how Steele looks, but how rarely we get to look at her--she is barely in the movie. As it turns out, Steele was only available for shooting one day, thus cutting her on screen time down considerably. Once she goes into the lake, we don't see her again until the very end, and everything that happens between her appearances is beyond boring. The acting is laughable. The lighting is offensively bad. The directing is amateurish. The plot is mind-numbing. The story is plodding, and the car chase at the end seems never-ending--I fell asleep not once but twice during this scene, and hit rewind just to be sure I didn't miss anything, and sure enough, I didn't! The end is as abrupt and bland as the rest of the film. If you are a Barbara Steele fan, watch this one for the few scenes she appears in--otherwise, skip it.

The She-Beast Movie Trailer
Posted by Josh at 7:59 PM No comments: 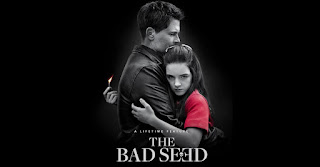 David Grossman (Rob Lowe, Wayne's World, St. Elmo's Fire) is raising a daughter, Emma (McKenna Grace, Independence Day: Resurgence), who may or may not be psychotic...well, this IS a horror movies blog so yeah, there's a good chance she is indeed nuts. Without going back through almost ten years of movie reviews, I am going to go out on a limb and guess this is the first time I have ever reviewed a Lifetime movie, and for good reason--they typically don't come anywhere near being a horror film. This one won't scare the daylights out of anybody, but there are enough horror elements to qualify for a review here. 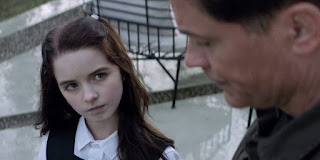 I'm not telling her I won't review her movie

A little back story: This 2018 made for television film is actually a remake of a 1956 film, something my Mom picked up on a couple minutes into the film (and, according to her, the original film is much better). The story is a good enough one--Emma is a smart, silent type of terror, and the back and forth between she and her nanny/tormentor Chloe (Sarah Dugdale) is very entertaining. Dugdale does a good job as Chloe, and Grace is wonderful as the twisted little girl. Surprisingly, it's Lowe who is off here--he has turned in some impressive performances over the years, especially in comedies, but Lowe was very out of place in this film, which he also directed--the directing is just as uninspired, although, in a brilliant bit of intertextuality, there is a scene that features Emma reading the book The Outsiders. 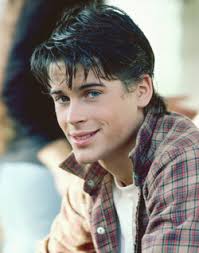 As made for television movies--and especially Lifetime movies--go, The Bad Seed wasn't all too bad--there are some unexpected scenes, good performances, and a decent ending--you just have to take the bad directing, questionable dialogue, and Lowe's performance with it.

The Bad Seed Movie Teaser Trailer
Posted by Josh at 6:41 PM No comments:

THE HILLS HAVE EYES 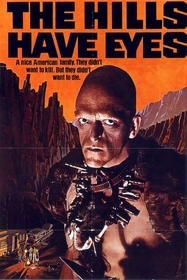 The Hills Have Eyes Movie Review

When their vehicles have some issues, a family out on a road trip is terrorized by a group of cannibals in the middle of the desert. This 1977 Wes Craven film seemed almost lost over the years, and chances are, in the last 12 years, you've probably come across the 2006 remake more often than the original film. It's easy to understand why--unlike the remake, this movie was never meant for mass consumption--it is so gritty it actually stands out in a decade filled with gritty films, and was right at home in seedy side of town grindhouses and drive in movie theatres. 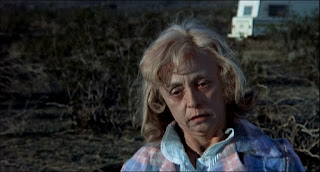 And a lot of the audience probably looked like this

The violence is fairly unrelenting in this movie, which is one of the things that will keep you going, even if the acting makes you want to turn it off. The character development is severly lacking--Craven does little to make you care about the victims, and in fact makes one or two so unlikable (especially Bob), you actually cheer when they meet their demise. The cannibal killers are a whole different story--Craven did a wonderful job with this group, making them despicable, disgusting, and easy to hate--everything a villain of this type should be, although I must admit, it's hard to hate Michael Berryman because, well, he's Michael Berryman. 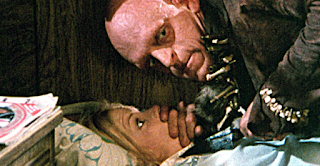 "I told you no smoking!"

If you are familiar with the remake and not the original, one stark contrast is in the villains--in the remake they are much more mutated; in the original, they are more like derange inbred hillbillies in the desert--desertbillies? A whole lot of this movie is scene for scene similar to the remake, with less happening between the chaos and bloodshed. The shots are also very...interesting. I know The Hills Have Eyes is considered a classic, and I really wanted to like it more than I did--I respect how influential the film is, and completely understand why, but as a viewer, I found it too slow, too clunky, and the acting far too unbearable to love it.

The Hills Have Eyes Movie Trailer
Posted by Josh at 6:35 PM No comments: