EVIL DEAD (From The Theatre) 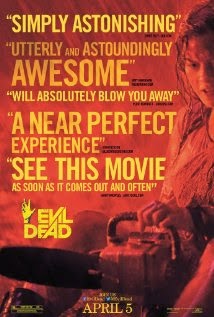 Let me start off by saying I LOVE the original The Evil Dead. It's the movie that introduced me to the awesomeness that is Bruce Campbell, was the first taste of a horror-comedy I ever had, and changed the way I thought about girls in the woods forever. It's a movie I have owned forever, watched dozens of times, and loved every time. So it goes without saying that when I initially heard somebody was remaking The Evil Dead, I cringed, flashbacks of the A Nightmare On Elm Street remake slashing through my head. "No way will I watch that one!" I proclaimed out loud. My girlfriend chimed in with a simple "Yes you will". Months later I heard Sam Raimi and Bruce Campbell himself supported this film and my mind changed, and my girlfriend, for once, was right.

All of that said, as the movie started, I told myself to just sit back and enjoy and try not to compare it to the original. I managed this for most of the movie, but may break that rule a bit here. The movie starts off fast, with a sequence explaining, to some degree, the evil in the woods. We're then introduced to our group of cabin-goers, mercifully with different names than in the original (I'm not sure my brain would have been able to process somebody else being called Ash). This time, the group has gathered at the cabin to help Mia (newcomer Jane Levy) kick a drug addiction. She's the first to start noticing strange things happening, but for a good bit of the movie, her friends dismiss it as her going crazy as a result of drug withdrawal--I thought that was a good touch. The movie is similar to the original in that The Book of the Dead is the source of all hell breaking loose, and wow, does it ever! 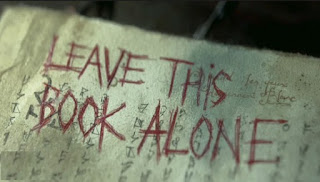 The pace of the movie is very good. If you're watching this in the theatre, and you have to go to the restroom, the only chance you have of going and not missing anything is when they first arrive at the cabin. Once the mayhem starts, it doesn't stop until the end. The story is familiar to The Evil Dead fans, but they added layers to it, which actually makes the story itself somewhat better (or at least more rounded) than the original. The gore and death scenes are incredible in this movie. Honestly, I don't know that I've seen as much gore, and over-the-top blood use, in a movie I saw at the theatre, and yes, I saw the entire Saw series, Final Destinations, etc, in the theatre. 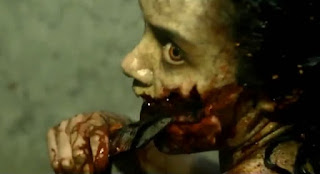 The filmmakers here knew when to make the scene realistic, and when to make it absolutely absurd, much like in the original. Another thing I really loved about this movie is the lack of CGI. Practically all the special effects were done the old fashioned way instead of relying on the crutch of computer assistance--nice touch. Even the acting was somewhat decent in this film.

Of course, with all things positive, there are negatives here and there. I didn't like the way they demonized Mia. They gave her the stereotypical "evil" contacts (look more like dinosaur eyes than anything) and the equally stereotypical, gravelling deep voice. FAR creepier was how the original film did what was essentially Mia's counterpart, Linda, with the white contacts, the evil doll makeup, and the creepy, childish voice and giggles. Still, it wasn't something that couldn't be overlooked.

The movie rolled along, and for the first 70 or 75 minutes, I was pretty much loving every second of it--then came the final ten or fifteen minutes. Pretty much from the time the lightning strikes (that's all I will say, as I don't want to give spoilers) until the end, the film takes a sharp left turn and falls apart completely. Plot holes starts popping up like dandelions in the summer. The excessive use of blood in the final scene is cool, but other than that, I sat there wondering "Why...why...why".

I was prepared to walk out of thee theatre and proclaim this the best horror film I had seen in years, and until that fateful scene near the end, it probably was. However, the end is so bad it fell two points on my scale. Shame.

Evil Dead Red Band Trailer (Spoiler: The "We're Going To Get You" part isn't actually in the movie)
Posted by Josh at 9:45 AM No comments: 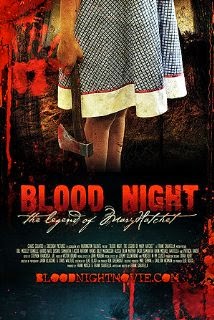 In the late seventies, a young girl named Mary Hatchet kills her mother and father. Ten years later, she is raped in the psych ward she has been living in, and gives birth to a child as a result. After being told the child did not survive, she goes crazy again, killing the staff of the hospital before escaping, only to be shot to death by the police. This all happens before the opening credits are shown, and the film goes down hill quickly from there.

Fast forward 20 years and we see the high school teenagers of Mary's town gearing up to celebrate "Blood Night", a tradition in the town, honoring Mary's killings. The next hour or so of the movie sees teenagers drinking, having sex, and drinking some more. I was bouncing back and forth between being bored out of my mind and irritated to the bone.

Star sighting: Bill Moseley stops by as Graveyard Gus and Danielle Harris (of Halloween fame) makes an appearance as the teenage (yes, Harris was 30 while playing this role) friend of the kind-of lead teenage girl, and both reappear near the end.

As far as the story goes, it's typical slasher fare: axe-murderer back from the dead to find her lost child and kill annoying (and my God, were they ever annoying), drunk teenagers. The movie was shot practically in the dark, so actually seeing anything is difficult at times. The acting, with the exception of Moseley (who himself kind of called this one in), is atrocious. Still, having watched bad horror films for over thirty years, I can overlook poor acting and lighting if a movie has a decent story (this one sort of does, though like I said before, it's nothing new), a bit of gore (this one does, though it is a bit over the top in a comical way), and anything else that can hold my attention. Where this movie fails most is in post. The editing of this movie is inexplicably bad. Overuse of red? Check. Cuts so fast it's impossible to really see what's going on? You bet'cha. It's like watching the result of a college kid who just found all the cool effects on Final Cut Pro. By the time we got to the last fifteen minutes, and something other than teenagers drinking and being obnoxious happens, I found myself not caring at all...good thing too, as the end is predictable, and the deaths not fulfilling in the least.

This movie came out of the blocks in a great way, and had the rest of the movie lived up to the opening sequence, it could have been a classic. Instead, it is a run of the mill direct to DVD film that you will likely forget very shortly after watching it. If you're a huge fan of Bill Moseley or Danielle Harris, it may be worth a viewing, though neither are in it for more than about twenty minutes, and I am a huge fan of Moseley and didn't find it worth a viewing at all. For everybody else, skip it, or watch until the opening credits roll, stop the movie, and imagine the rest for yourself.


Blood Night: The Legend Of Mary Hatchet Red Band Trailer
Posted by Josh at 8:54 AM No comments:

RETURN OF THE LIVING DEAD 4: NECROPOLIS 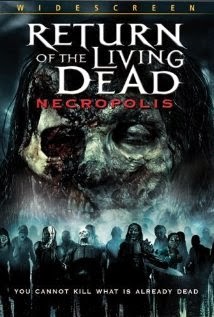 As a fan of ROTLD 3, I was very much looking forward to this movie. Unfortunately, that enthusiasm soon died as I started watching it. The plot of the film is fairly bland but acceptable, the dialogue is horrible, and the acting is as bad as you will see. The zombies look, just, bad--think zombie makeup you can buy at K-Mart around Halloween. 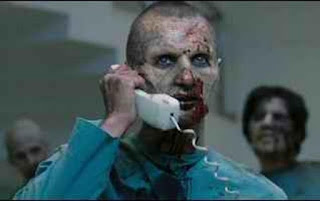 "No, sir, K-Mart does not refund partially used makeup kits"

The only redeeming qualities of this film are the sheer amount of blood and gore, two characters that appear near the end of the film that may put on in mind of Cenobites from the Hellraiser series, and a cute, likable character named Becky, played by Aimee-Lynn Chadwick. Also of note is that some behind the scenes stuff is shown as the credits roll, showing the zombies goofing off between takes and some of the special effects. Those few minutes are actually more enjoyable than most of the rest of the film and added a point to my score you will see below. All in all I would say skip this one unless you can maybe pick it up for a buck somewhere.


Return Of The Living Dead 4: Necropolis Movie Trailer
Posted by Josh at 8:53 AM No comments: