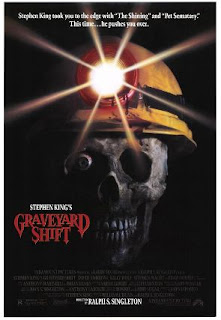 Workers in a rundown mill have three serious issues to deal with: a rat infestation, a horrible boss, and a rat-bat creature thing in the basement. This movie, based on a Stephen King short story, does its best to support an argument many make--movies based on King's stories are never as good as the story. In all actuality, this should have never been a movie. Graveyard Shift would have worked out best as a segment in a Creepshow type movie, or even an episode of Tales From The Crypt or another such show. Right off the bat you will notice the low quality of the film and the lack of acting ability--the one exception to this being Brad Dourif as exterminator extraordinaire Tucker Cleveland, also known as the only interesting character in the film. The dialogue is horrendous, and you can tell they did what they could to stretch this as much as they could in order to deliver a feature length film. The hero of the film, John, is one-dimensional, and the actor playing him (David Andrews) also makes him as stoic as possible. The boss of the mill, Warwick (Stephen Macht) has potential to be a memorial villain, but the senseless decision he makes, coupled with Macht's inability to deliver a coherent accent, make him borderline unbearable. There are some good things about this movie, however. The undefined monster in the basement comes off as scary when we see brief glimpses, but when we see him for an extended period of time...well... 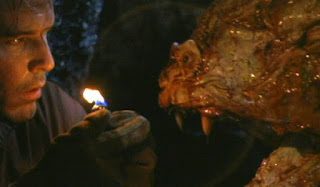 Is it a bat? A rat? A combination of the two? Why is it there? Your guess to the answers to these questions is as good as mine. He does bring the gore, however, so there's that. There are a few scenes near the end that bring the creepiness level up a bit, and a twist (of sorts) that will get your attention. Also, as an added bonus, sit through the credits to hear a really cool song that samples many of the lines from the movie. This movie has a very late 80's/early 90's direct to video feel about it (though it wasn't), so if that's your cup of tea, you will likely enjoy this film. However, this was during a time when practically everything Stephen King wrote was turned into a feature film, and among those films this one ranks near the bottom.