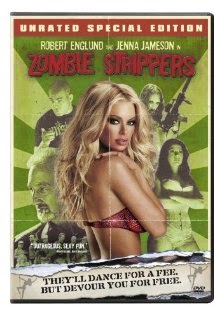 The United States Government has released a virus turning people into zombies. A soldier becomes infected, stumbles into a strip club, and infects a stripper, who infects other strippers, turning them into, yes, zombie strippers. For as bad as the plot sounds, the movie is even worse. There are a couple moments here and there that are interesting but most of the film is stripper turns into zombie, dances, kills one of the clientele, turns another stripper into a zombie, she dances, kills somebody, etc. The dialogue is awful, the acting even worse (a few people may recognize singer Roxy Saint as one of the strippers), and the special effects are horrible (especially anything CGI). There are a couple death scenes that are mildly interesting, and Robert Englund (A Nightmare On Elm Street series) is pretty awesome as the greedy club owner, but as for anything else positive about this movie, not much can be said. 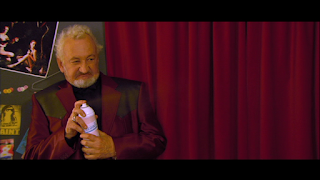 His reaction when offered this role?

I understand they were trying to make a comedic B-movie here. The problem is that it is not funny (at all) and instead of coming off as homage to B-movies, it is just a really bad movie--Englund deserves so much better. I can only recommend this movie for Englund’s performance, or if you are a fan of Saint and want to see her topless and looking like a zombie. Otherwise, skip it at all costs.

TOP OF THE FOOD CHAIN (aka INVASION!) 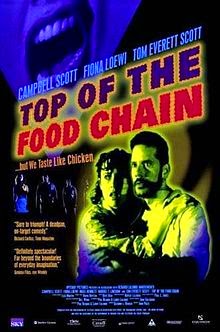 Atomic scientist Dr. Lamonte (Campbell Scott, The Exorcism Of Emily Rose, Singles) goes to an isolated town for research. While there he meets some very strange people--some local, some not of this world. Soon, bodies start turning up as Lamonte and the people of the town try to figure out who, or what, is killing and eating the small town denizens. This sci-fi comedy is a spoof of alien/creature features of the 1950’s and it one of the quirkiest films I have ever seen. Scott is absolute gold as the clueless scientist, and Fiona Loewi gives a very strong performance as the dreamy Sandy Fawkes, a girl who falls for Lamonte. Honestly, you could throw everything else in this movie out and it would be worth watching just to see Scott and Loewi. 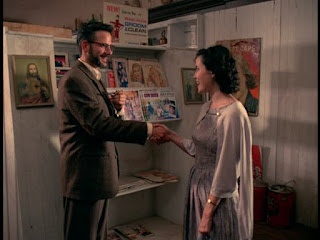 However, there is plenty more to enjoy here, from a very witty and, at times, laugh out loud funny script, wonderfully cheesy special effects, and, of course, the aliens. This Canadian movie, known as Invasion! on the U.S. DVD, came out in 2000 and I hate that I never heard of it before now. If you get this movie and understand what they are doing with it (I did), and if you are a fan of 1950’s sci-fi movies (I am), you will probably love this film (as I did).


Top Of The Food Chain Movie Trailer
Posted by Josh at 1:19 AM No comments:

THE LAST EXORCISM (From The Drive-In) 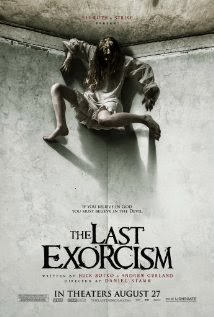 Cotton Marcus (Patrick Fabian of tons of television shows) is a Priest who has lost his belief in God and, after reading about a child dying from an exorcism, agrees to do one final exorcism, this time with a documentary film crew in tow. He reads a letter sent to him from the father of a girl he believes to be possessed, so Marcus and crew head to the farm of the girl to prove that she is not possessed and fake an exorcism, but they find that maybe there is something abnormal there after all. This movie comes off a lot like a Blair Witch Project rip-off, from the shaky, amateurish camera work to the slow build to the abrupt ending. The story itself is interesting at times, very cliched at others, but it does keep you into the movie throughout. The performances are nothing to remember, with the possible exception of Ashley Bell as Nell, the possessed girl. The trailer and television spots make this look like the scariest movie since The Exorcist—it’s not. Yes, there are a couple creepy scenes here and there, but it is far from “scary” (let me note that while I am generally not scared while watching movies, I can appreciate a movie being “scary”, especially films having anything to do with demon possession). 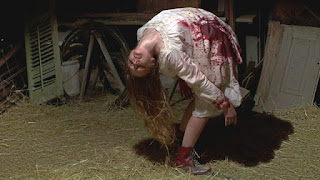 Okay, maybe it's a little scary

All of this is fine as, like I said, you stay into the movie and it is decent. And then the end comes. I will not spoil it, but it tries to go with a bit of a twist, is terribly dark, and just falls apart completely in a matter of seconds, taking what was a nice little horror flick and turning it into direct to video awfulness. I cannot express enough how bad the ending was—it dropped at least two points off my score and is the reason I suggest skipping this movie altogether.


The Last Exorcism Movie Trailer
Posted by Josh at 9:56 PM No comments: