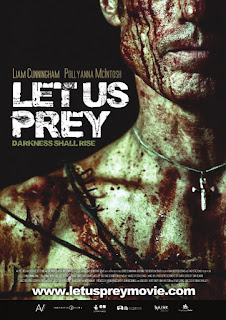 It appears to be another ordinary night at a small town Scottish police station until a stranger with no name (veteran actor Liam Cunningham) shows up. Soon we begin to see each person in the jail, as well as the officers themselves, have a dark past they are about to be held accountable for. This is a movie that starts slow--we get to know each character fairly well in the beginning, especially new constable Rachel Heggie (Pollyanna McIntosh of The Woman). As the secrets of the stranger begin to reveal themselves, however, the movie starts to take off. 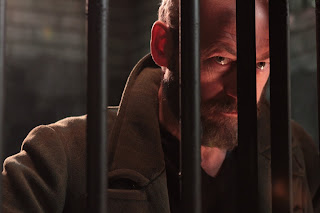 This is not an entirely original film--in fact, comparisons to both The Traveler and Storm of the Century would be fair. When the action does pick up it packs quite a punch--and plenty of blood. This is a well shot film, so visually you will likely be very pleased--the acting is less impressive. Cunningham does a decent job with the character he is given, and everybody else falls flat or goes way overboard. The CGI used in the film leaves a lot to be desired as well. Since we've seen so many movies like this come along over the years there's nothing really original or unpredictable about Let Us Prey--it's not a great film, but it's nothing horrible either.

﻿
Let Us Prey Red Band Movie Trailer
Posted by Josh at 8:02 AM