THE 5TH WAVE (From The Theatre) 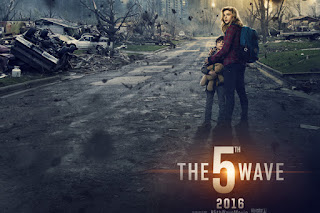 A large U.F.O. is spotted in the sky (think Independence Day) and as people begin to panic, the aliens (called "Others" here) inside begin a series of attacks, known as "waves". Teenager Cassie Sullivan (Chloe Grace Moretz of Dark Shadows and Let Me In fame) is now on the run as she attempts to make it from somewhere near Cleveland, Ohio to Wright Patterson Air Force Base in Dayton. Here's the thing about this movie, and why I chose to see it (and put it on this site)--first and foremost, it's an alien invasion sci-fi disaster film, and I am a big fan of this genre; unfortunately, it doesn't keep this theme up for long, but more on that in a moment. This movie comes out swinging, and the first part of the movie is really, really good. The tone is one of helplessness, the cinematography is wonderful, the characters are developed well, the acting (with the exception of Zackary Arthur as Cassie's little brother) is impressive (especially Moretz), and all hell begins to break loose as we see the waves come on. 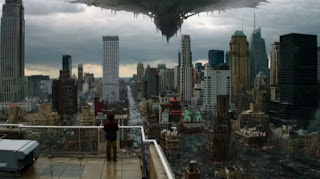 A different sort of wave did this

People are dropping dead left and right, and we are shown many very impressive visuals to hammer home the message. Unfortunately, the movie takes a nosedive the second we see this guy... 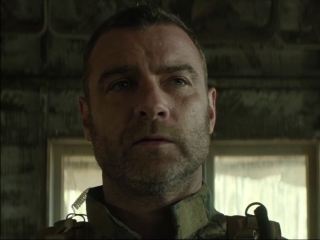 Things are about to get weary

Not that I'm not a fan of Liev Schreiber--I actually am a fan and was happy to see him in this, but absolutely everything that happens from the moment we see him in this film all the way to the very end is so predictable it becomes painful to watch. Did I say painful? You ain't seen nothing yet. This just-a-second ago alien attack sci-fi awesomeness film quickly implodes and spews out a teen romance film...A TEEN ROMANCE FILM!!!!! 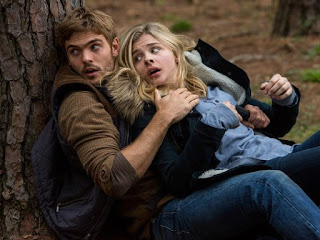 Watch where you're putting that hand fella

To make matters worse, the popcorn was all gone by this point and my girlfriend, left on her own at the concessions, got a medium instead of a large, so refills were out of the question. After suffering through what seemed hours of scene switches between Cassie and her new boy Evan (English chap Alex Roe) flirting about and Cassie's former crush Ben Parish (aka "Zombie", played by the stone faced Nick Robinson, an actor who, given more screen time, may have single handedly ruined the latest Jurassic Park film and does his best to do the same to this film--not that it needs much help...) and other children being trained by the Army in Dayton to battle the Others, leading to exactly one battle that more closely resembles a bad video game than a box office film, everybody finally meets up and...well, I guess we have to wait for the sequel to see anything actually happen. Anybody familiar with the Dayton, Ohio area (I lived in, and visited, Dayton for many years) will get a few additional laughs in this film. These will include the notion that all land between Cleveland and Dayton is wooded, seeing a sign that indicates Wright-Patterson Air Force Base is 46 miles away, the very large hills surrounding said sign, and constantly hearing people say "Wright-Patterson" instead of the norm: "Wright-Patt"--it's not hard to figure out that nether the writer of the book the film is based on, nor the film's director (J Blakeson), have any idea of this area and likely chose Wright-Patt based on the long-standing belief that aliens and U.F.O. aircraft are stored at the base. Lets get back on the tracks--if you have any intention of seeing The 5th Wave I recommend turning it off once you see our friend Liev make his grand entrance and spend the next hour and a half imagining what could have been.

The 5th Wave Movie Trailer
Posted by Josh at 6:42 PM