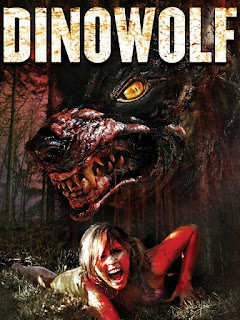 An experiment to bring back the extinct dire wolf and cross it with human DNA goes awry, leaving an escaped killing machine free to feast on locals in a small town. Now it's up to Sheriff Parker (Maxwell Caulfield of Empire Records), two special agents (John L. Curtis and Kristen Howe, a woman who bears a striking resemblance to a man I work with--sorry Ali), and the sheriff's son, Jim Martin, to stop the beast. 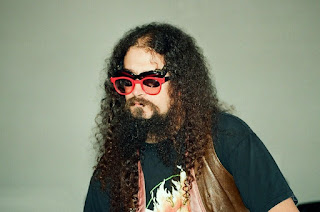 Not THAT Jim Martin

If you are familiar with the director, Fred Olen Ray, you know right off bat what you're in store for here--almost no budget, little to no acting ability in the movie, and, when it's all said and done, something that is probably going to be just a step up from your standard Troma film. As long as you recognize these facts and don't expect the next great American film, you may find yourself liking some of his work, and Dire Wolf is no exception. Sure, the premise is ridiculous, but that adds to the enjoyment of the movie. And yes, the acting is pretty bad, but you can tell that at least some of them are trying, so there's that. The wolf itself--truthfully, I was actually pleased with the wolf. 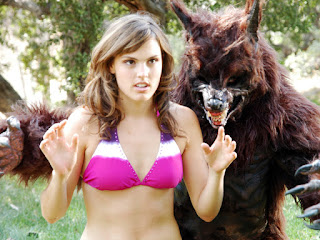 There he is now...look behind her...there

In a world of poorly executed CGI monsters it is oddly refreshing to see a good old fashion costumed monster once in a while. If you like tons of blood and guts (literally), you will find lots to like about this film, though practically every death scene is identical to the one before it. More than anything this will likely remind you of a SyFy movie, and sometimes that's not such a bad thing.
On A Scale Of One To Ten: 5