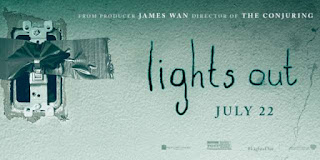 After killing a man named Paul, a mysterious spirit, visible only when the lights are turned off, haunts Paul's mentally unstable wife and her kids. This much-heralded horror film truly starts off with a bang--the opening sequence is memorable, effective in setting up the rest of the film, and genuinely creepy. Unfortunately, the film doesn't deliver on the promise of the first ten minutes--but let's not get ahead of ourselves here.

We don't want to make her mad

The story is a very intriguing one, albeit one filled with several holes. The connection between the spirit and the family is creative, and the resolution, while one you may see coming, is still somewhat jolting. Where the movie falls apart is overwhelming the viewer with one horror movie cliché after the next. For a film that separates itself from the pack initially, it seems to do everything it can from that point on to fall back in line with a thousand other similar films. The acting is split down the middle--Maria Bello turns in an impressive performance as Sophie, the mom, and Alexander DiPersia is surprisingly likable as Bret the boyfriend; on the flip side, Teresa Palmer is disappointing as lead character Rebecca, and Gabriel Bateman is borderline unbearable as Rebecca's little brother Martin. The film's opening and some impressive visuals allow this film to stand just above a run of the mill ghost flick--but just barely.


Lights Out Movie Trailer
Posted by Josh at 6:41 PM