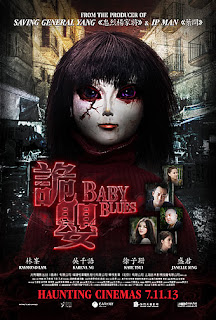 Upon buying a new house, a young couple discover the previous owner has left something behind...

Loneliness made him sad

As it turns out, the doll is haunted...or possessed...or something...and really weird stuff begins to happen: the man, a music producer, records a song that makes people want to die, his wife gives birth to one child but the twin is stillborn, leading to the wife believing the doll is the dead son, there is an all-knowing hobo living in a cardboard house on the other side of the street from the couples' new million dollar home--mass hysteria! This 2013 Chinese film brings to mind the expression "so bad it's good". The CGI, much of which appears to have been intended for 3D, is horrible. The dialogue is mind numbing--I actually wondered several times if something was lost in translation, as the movie is subtitled. Practically every scene contains some sort of continuity error. There are attempts at humor here and there, but it's the unintentional humor that will have you laughing hardest--the doll nudging the baby across the room is fantastic. I can't honestly say if writer Raymond Bak-Ming Wong and/or director Po-Chih Leong intended this to be so bad or if they put an earnest Ed Wood attempt into this film, but there is nothing even remotely scary about Baby Blues; however, if you are looking for a movie that's lots of fun to watch, this one may be for you.


Baby Blues Movie Trailer
Posted by Josh at 9:07 AM No comments: 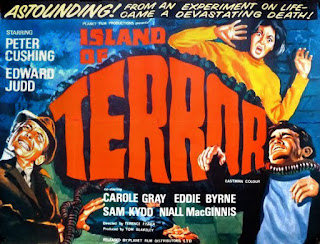 On a faraway island a science experiment goes wrong, resulting in mysterious creatures known as silicates killing people and eating all the bones and tissue from the body. Now a group of doctors and scientists, along with the wealthy love interest of one of them, make their way to the island to see what they can do about it. This 1966 creature feature seems very unbalanced from the beginning. It is an obvious nod to the schlock awesomeness of the 1950s, bordering on being a bad impersonation of The Blob, but it also looks and feels like a Hammer film (maybe it's just because Peter Cushing stars?). Add to this some unexpected (and typically failed) attempts at humor, and music that sounds like it is direct from a comedy--this truly throws off the feel of the entire film. Not that Island of Terror is anything to be taken too seriously anyway... 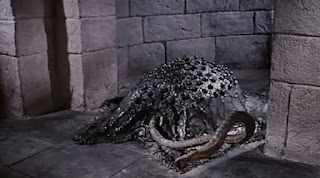 This IS one of the creatures, after all

...but one has to scratch his head wondering why this comedic attempt was put in here. Mercifully, when it happens it is in short doses, and it doesn't completely overwhelm the film. The acting is fairly bland--nothing terribly offensive, but nothing outstanding either, and Cushing has certainly been better. Some of the visuals are effective, from an unexpected bit of gore (a severed hand scene) to the images of the people after they have had their bones eaten away. 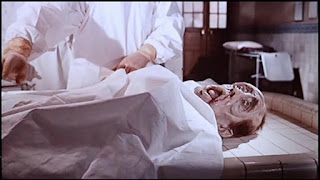 They used to call him Bony...

The climax of the film is decent, creative, and actually has you wondering for a moment if everybody is doomed--an epilogue indicates scientists in Japan have conducted the same experiment, to the same horrific result, but alas, there was never a Japanese sequel. Island Of Terror is no masterpiece by any stretch of the imagination, but it is a fun late night/early morning movie.

Island of Terror Movie Trailer
Posted by Josh at 9:16 AM No comments:

KILLER MERMAID (aka Nymph) (aka Mamula) (aka Dark Sea) 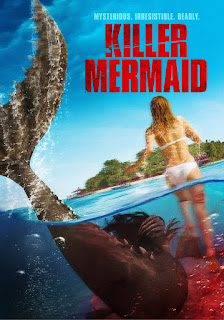 A group of five people in Serbia encounter a killer human and, yes, a killer mermaid. This movie of many names is jam-packed with clichés, if not action--at least initially. After seeing a topless woman and the man she's with killed, we meet our main characters--Kelly (Kristina Klebe, Halloween) and a few people from other countries who clearly struggle speaking English, yet...speak nothing but English throughout the film. We see creepy fisherman types, bringing to mind I Know What You Did Last Summer, a comparison so obvious a character even makes reference to it. After no build up of suspense, a half-hearted attempt at drama amongst the cast, and little reason to care even the least bit about the character, we FINALLY get to see the mermaid. 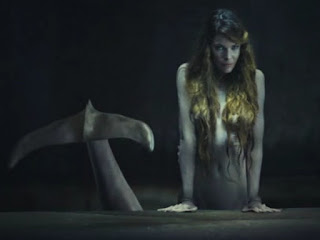 There's nothing can console her...

Of course she is only momentarily in this form before becoming a monster and unleashing all hell---well, not really. It's more the case she just kind of hangs out and waits for the human killer to feed her. Once the mermaid appears the characters begin dying off, leading to a rushed, albeit somewhat unexpected, ending. This movie has a nostalgic feel to it that is tragically spoiled by poor CGI. Killer Mermaid is some strange mix of not being as bad as I expected it to be, but in a most unfortunate way.

THE THIRSTY DEAD (aka BLOOD HUNT) 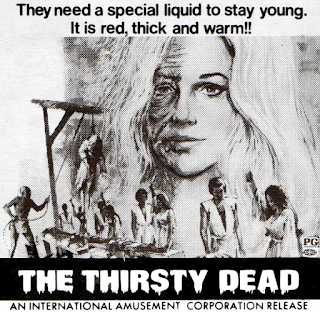 A cult of savages in the mountains of Manila kidnaps four young women, with the intention of drinking their blood to maintain immortality. We begin with the women being captured, followed by a LONG series of scenes of them and their captives walking through the jungle--Randal explaining the Lord of the Rings movies in Clerks II comes to mind. We finally arrive to the caves the cult resides in, and we meet their quasi-leader, a runaway member of Parliament... 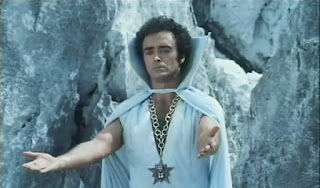 The women all bond as they try to figure out if they want to escape. We see skeletons that look like they were borrowed from a high school biology class. We see the women who have been used before--they somewhat resemble zombies. They all worship a severed head in a jar. The acting ranges from bad to worse--Jennifer Billingsley as Laura, the lead, is particularly horrible. There is very little blood and surprisingly, given the premise and time this came out (1974), no nudity--in fact, the film is rated PG and comes off as more a made for television film than anything. The dialogue is dreadful, the pace is akin to walking through mud past your ankles, and nothing ever really happens. The only real redeeming qualities of this movie are the performance of Judith McConnell as Claire and some of the makeup work toward the end is pretty impressive--these two things do not justify spending 90 minutes of your life watching this movie.

THE TAKING OF DEBORAH LOGAN 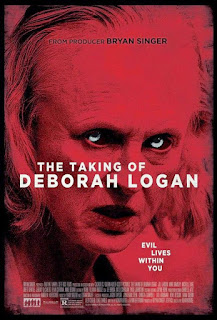 A film crew shoots a documentary on Alzheimer's disease, but their subject, Deborah Logan (Jill Larson), gives them a lot more than they bargained for. This 2014 Bryan Singer-produced, low budget found footage/possession film starts off pretty strong--we get a look at an interesting disease, a decent back story, and a slow, creepy build. The movie begins to feel familiar, but different enough that you still wonder what direction it may be heading in. The real strength of this movie is in the performances of Larson, Anne Ramsay as Logan's daughter Sarah, and Michelle Ang as Mia, the leader of the documentary crew. Though they are few, there are some absolutely terrifying scenes in this movie. 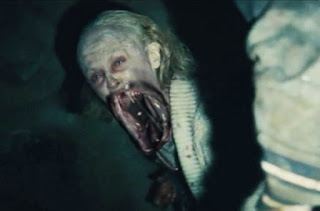 You'll see this in your dreams for days

Unfortunately, what starts out as something a bit different than what we are used to dissolves into horror clichés and jump scares galore--I can only guess Singer had something to do with this. Some of the decisions of the people in the film will leave you scratching your head (trying to burn the body inside), and some things (like police officers running through darkness without a flashlight) will leave you shaking it. The Taking Of Deborah Logan is a movie that had the potential to stand out from the pack, but ultimately will find itself lost among the rest.

The Taking Of Deborah Logan Movie Trailer
Posted by Josh at 11:42 PM No comments: