GAMERA VS GAOS (aka Gamera vs. Gyaos) 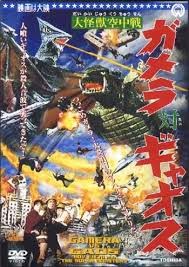 A volcano eruption in Japan unleashes Gaos, a monster set out to destroy everything in its path. Gamera soon arrives to battle the monster. This movie was released with two different titles and two different spellings of the villains name: Goas and Gyaos. As the collection I own has the spelling as Gaos, that's what I will stick with here. Gaos is a pretty cool looking creature, resembling a cross between a bat and a raven, with glowing yellow eyes. He spits laser-like beams from his mouth, resulting in things in being split in half.

The story in this movie is sort of weak and, of course, the special effects are pretty bad. The main kid in this one is rather annoying too, made worse by the irritating dubbing. Still, the reason for watching these movies has little to do with acting or dialogue. It’s all about the action, and that is pretty good here. Gaos is vampire-like in that he only comes out at night and is hurt by sunlight. Gamera gets pretty creative in some of the battles too. This was an okay movie that, unfortunately, slows down too much throughout, and the ending is sudden and makes no sense at all. 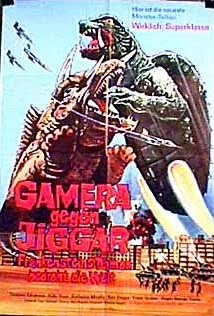 After an ancient statue is moved for the World Fair in Japan, a curse is unleashed and Monster X arrives to wreak havoc on the city. It’s up to Gamera to save the day. This is a Japanese monster movie from 1970 that falls nicely into that genre. Gamera is a giant turtle looking monster that protects the citizens, particularly the children, of Japan. He flies by tucking his head and legs into his shell, producing jet pack looking flames that spin him in circles and send him on his way.

Monster X is a red triceratops-looking creature that can shoot projectiles from his horns. 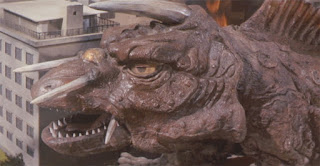 As is typical with these sorts of movies, the creatures fight a couple times throughout the movie. The end of one fight finds Gamera stuck on his back while Monster X goes on to destroy the city. You know what to expect from these movies: bad special effects, awful dialogue and dubbing, and a lot of fun along the way. Gamera is a comically cute looking creature that is instantly likable. The sets are obvious small model buildings with people in rubber suits crawling and walking over them to crush them. This does not matter at all--in fact, it adds to the enjoyment. I grew up a huge Godzilla fan so I love such things. Oddly, the music throughout sounds more like some American Patriotic tunes. As I said, this is a pretty fun movie that fans of this genre should enjoy.


The Gamera vs Monster X original Japanese trailer
Posted by Josh at 6:07 PM No comments: