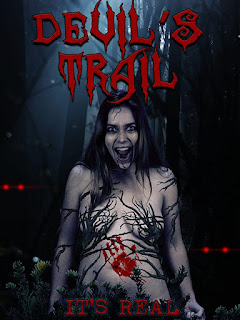 Two reality survival show hosts go out into the New Jersey woods to shoot a 3 week survival trip. Along the way they run into three naked witches, unexpected snow and sleet, see some mysterious red eyes, and fight with each other...often. 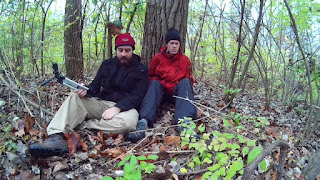 "Can we just kiss and make up already?"

I can't remember their names, and to be honest, am feeling a bit too uncaring to Google it, so we'll go with this--the bearded guy is the typical obnoxious character and the other guy, the alleged slingshot expert, is the whiny voice guy. Naturally, this is a found footage film, and it very much steals borrows from The Blair Witch Project--I expected the whiny voice guy to hold the camera to his face and cry about how scared he was at any moment. Though we didn't get that, we did get other elements from that movie, such as the weird symbols found in the woods and the walking in one direction all day to find yourself back where you started. The ending reveals this may have been intentional, but more on that later. Other than the witches and a girl who drives the two to their destination, the acting is pretty much limited to the two guys--at first, you very much get the sense they are just being themselves, which is fine, as it added to the "this is all real" feeling they were going for. As the movie progressed, however, and dramatics were added, their true acting chops (or lack thereof) are revealed. They bicker almost constantly, reminding me of an old, married couple, and the more this happens, the whinier whiny voice guy gets. Still, I held on to hope for this one, as God knows I've seen worse found footage films, but that hope was destroyed by the ending, which is as ridiculously convoluted as one can imagine. Skip it.