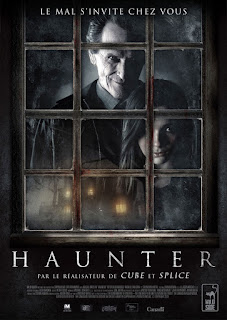 Lisa (Abigail Breslin, Signs) keeps reliving the same day over and over. She soon discovers this is happening because she is dead, and she and her family are not the only ghosts in her house. This 2013 film is an interesting take on the haunted house story--the main character is a ghost trying to contact the living for answers and to warn them of what is to come. Throw in a bit of time travel and possession and you have a nice melting pot of horror that has the potential to explode from awesomeness or awfulness--thankfully, this one leans toward the former, though it does come up a bit short in attaining it. There are not a ton of scares in the movie (though it certainly presents a creepy vibe). There is no gore to speak of. Everything is just more...subtle. 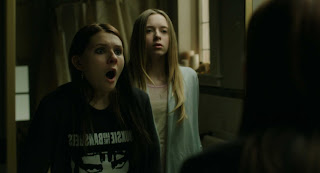 There really is a lot to like about this film. The story moves on at a really good pace, something rare for a horror film that is not filled with the aforementioned bloodshed. The characters are likable, and the actors do a good job across the board. Lisa is an 80's New Wave fan (she sports a Siouxsie and the Banshees shirt throughout, quotes The Smiths, has posters of Joy Division and The Cure, etc), so naturally she gets points for that. The time-jumping is done in an interesting way, and the movie makers do a fine job defining each decade visually. The main drawbacks of the film are the beyond questionable actions of some of the characters, the ending seems way too much a cop out, and it just feels like the film never delivers that knockout blow you expect. All this said, Haunter is a nice little film that is certainly worth a viewing.

As a bonus, I share with you the song that repeated itself in my head throughout the entire movie.